Altitude44, the UK’s largest urban high wire masterminded by the Magna Vitae Trust for Leisure & Culture, has scooped a major regional award for its positive impact and promotion of peoples’ health and wellbeing.

Magna Vitae’s delighted Chief Executive Mark Humphreys and Altitude44 manager David Sneddon, were among a delegation invited to the fbe (Forum for the Built Environment), East Midlands Awards 2019 where the Skegness visitor attraction was named as the Non-Residential Project of the Year.

In announcing the winning project, the award audience was told: “Altitude44 was particularly appealing to the judges because of the positive impact it has had on both visitors and residents of Skegness.

“It is a highly attractive addition to Skegness’s famous seafront and encourages fitness and wellbeing as well as adventure and excitement. It is innovative and immediately became a landmark and a new focus for the local community as well as providing new employment opportunities,” it was added.

Since opening, Altitude44 has attracted thousands of people who, after safety briefings, tackle 44 ‘seaside themed’ fun objects to ascend four platforms – ending in spectacular views over the east coast, and an option to abseil down ‘the drop’. 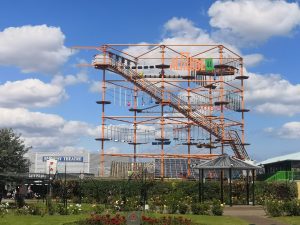 The team is now looking forward to a full season for Altitude44 when it re-opens fully for the 2020 spring and summer.

“We always knew we wanted to offer something very different and bold in Skegness, which was a great attraction but also lived by our ethos to get people up and active, helping them to look great, feel great and live a great life. Altitude44 has achieved all these aims, and more, and we are extremely proud that it has been recognised in this way,” Mark said.

Meanwhile the community arm of Magna Vitae is also celebrating, having been shortlisted in the national Alzheimer’s Society Dementia Friendly Awards 2019. The team’s Still Me project has made it to the finals in the Championing Diversity category with the ceremony to be held later in November.

We really appreciate you taking the time to report this bug, we will look into it ASAP.